Deacons for Defense and Justice

This Black History Month episode of Count Time Podcast is an excerpt from interview with Charlie Granger as he describes his experiences as a member of the Deacons for Defense and Justice. Includes videos, links to award winning articles and the song “The Deacons” by its founder.

“Deacons forced the Klan to re-evaluate their actions and often change their undergarments.”

The Deacons for Defense and Justice was an armed  Black self-defense group founded in November 1964, during the civil rights era in Jonesboro, LA. African Americans were harassed and attacked by white KKK vigilantes in Jonesboro in 1964 including the torching of five churches, a Masonic hall and a Baptist center. The police and sheriff in the south as well as most government organizations were all infiltrated by the Klan.As a result, the only protection the people had against the Klan was the Deacons.  On February 21, 1965—the day of Malcolm X’s assassination—the first affiliated chapter was founded in Bogalusa, LA, followed by a total of 20 other chapters.
The Deacons had strict membership criteria for applicants. They accepted only male American citizens over the age of 21. They preferred married men with military service, as well as registered voters. They vigorously upheld their stance of only acting in defense.  Every member of the Deacons had to pledge his life for the defense of justice, black people, and for civil rights workers.
Although the FBI and white media regarded the Deacons as bringers of race warfare, they actually worked closely with CORE in their nonviolent protests as a way to bring about change. Activist Roy Innis said that the Deacons “forced the Klan to re-evaluate their actions and often change their undergarments.”
The Deacons were recognized as a nonprofit corporation, according to papers filed March 9, 1965, with the Louisiana Secretary of State. The charter noted the Deacons’ purpose was to “instruct, teach and educate Citizens of the United States and especially minority groups in the fundamental principles of the republican form of government and our democratic way of life.” 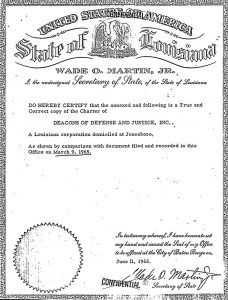 “That is why the Deacons was born,
“To protect our families and our home
“Protect the lives of those that aren’t born
“For decent homes and schools,
“and to fight against Jim Crow Rules
“That is why the Deacons was born.”
“We went throughout the lands,
“Setting up chapters on every hand
“We had our Bibles on our knees.
“Oh, you good Christians!
“I know you don’t understand
“Why we’re handing out 38s to our band.”
Read award winning series about the Deacons for Defense and Justice by the LSU Manship School News Service
Library of Congress series on the Deacons for Defense and Justice

The Deacons were born to protect our family and homes a national legacy.